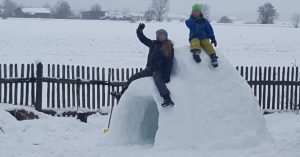 Last Sunday for the first time in many years we had much more snow than usual in Munich. Of course we wanted to take the opportunity and finally build an igloo again. And even more because the snow was very sticky and very suitable. Since we already had an appointment in the afternoon, the time was limited and we had to come up with a plan.

So I made use of the target definition according to SMART.

S.M.A.R.T. stands for the following criteria:

Concerning the penultimate letter “R” I know two different definitions, where only the first description makes sense to me. For one thing, the third point “A” already defines feasibility, because if a goal is not achievable, then it was not realistic, and for another, a goal must also have a certain relevance, i.e. priority. As soon as this is not one of the priorities, implementation will generally become difficult.

This is how we arrived at the following definition of the objective:

We, the children and Dad, want to build an igloo in our garden (“S”pecific). At least all three persons should have room and the youngest son should be able to stand inside (“M”easureable). Due to the afternoon appointment we want to be ready for lunch on the same day (“T”erminated). As this is not our first igloo, we already have experience and are confident that we will reach our goal (“Achievable). With the finished „building“ we will have a lot of fun and a nice memory of our time together (“R”elevant”).

It goes without saying that we have incorporated continuous feedback rounds and adapted our methodology. The basic idea was to use a larger snow slider as the inner formwork and to build up the snow from the outside as a wall upwards. Initially, we thought it would be a good idea for Dad to hold the formwork due to the force required, for younger son to take the skibob for the snow and for older daughter to build the walls. But this didn’t work anymore at a certain wall height, because she would have had to lean too much against the walls due to the missing body size, but this wasn’t so stable yet. Therefore we switched the roles and I modelled the walls up.

After about 3 hours we were done with our work and satisfied. Do you like our igloo?

Below an article by Tony Robbins, in which he also talks about the S.M.A.R.T. goals:

selling is for everyone 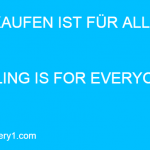 I am convinced that even professions that are not typical in a sales role  should deal even more intensively with the topic of “selling”. From my point of view it doesn’t matter whether you are a nurse, architect, doctor, engineer,

Close
Do you want to read more similar stories?

Do you already like us on Facebook?
Do not ask me again for Facebook
Continue to the article »
We use cookies to offer you a better browsing experience, analyze site traffic, personalize content, and serve targeted advertisements. Read about how we use cookies and how you can control them by clicking "Cookie Settings." If you continue to use this site, you consent to our use of cookies.Got it